Free Download Sam Smith's The Thrill of It All to MP3 Emotional, heart-wrenching, and poignant, Sam Smith’s new single “Too Good at Goodbyes” has captured the hearts of hopeless romantics everywhere. When Sam Smith came onto the music scene on the music scene with his 2014 debut album "In the Lonely Hour", he sang beautiful and searing songs about love lapses and loneliness. There are moments you'd feel sad for him, but then you'd remind yourself not to pity the guy too much, because, wow, he has THAT VOICE.

So then it shouldn't come by surprise that his second album, The Thrill Of It All, which was released on Nov. 3, is laced with lyrics either inspired by heartbreak or morose enough to make listeners everywhere frown in empathy while saying "Yes! Me too!" to themselves.

“Too Good At Goodbyes” was a charting success from the moment it arrived, peaking at No. 1 in the U.K. and No. 5 here in the U.S.A, where it became his fifth top 10 hits. One of the two promotional singles he dropped before The Thrill Of It All was shared in full, “Pray,” also made it to the No. 55 on the Hot 100 chart.

Here, you can stream Smith's The Thrill of it All below or through the Spotify App:

If you have subscribed to the Apple Music service, you can also stream Smith’s The Thrill of it All below.

How to Free Download Sam Smith's New Songs from Spotify to MP3?

If you need to stream Sam Smith's hot albums or songs via Spotify for free and without ad breaks, we suggest you try to download these music files from Spotify to MP3 format with Sidify Music Converter Free. This program not only provides a simple and free way to download your favorite Spotify music to MP3, AAC, FLAC, WAV, AIFF, and ALAC format, but also keeps some ID3 tags, including song title, artist name, Album, and Art Cover. In the following, we would guide you to download Sam Smith's new album or hot songs from Spotify to MP3 for free. After that, a new adding music window would pop out as below and you can drag & drop the playlist link of Alan Walker's releases from Spotify to this adding window. Check the music that you need to convert and then press "OK". 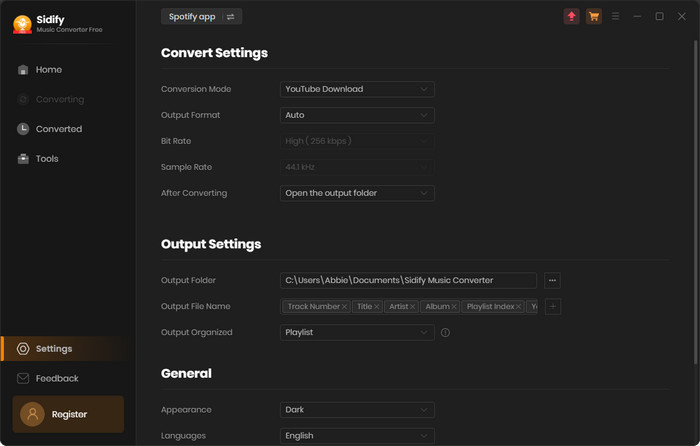 After conversion, you can easily find the well-downloaded MP3 file in the Converted section on the left. Now, you can enjoy Sam Smith's New Songs on any MP3 player as you want.

How to Download Top Workout Music Playlists to MP3