Audacious is an open source audio player. As descendant of XMMS, Audacious plays your music how you want it, without stealing away your computer’s resources from other tasks. Drag and drop folders and individual song files, search for artists and albums in your entire music library, or create and edit your own custom playlists. Listen to CD’s or stream music from the Internet. Tweak the sound with the graphical equalizer or experiment with LADSPA effects. Enjoy the modern GTK-themed interface or change things up with Winamp Classic skins. Use the plugins included with Audacious to fetch lyrics for your music, to set an alarm in the morning, and more. 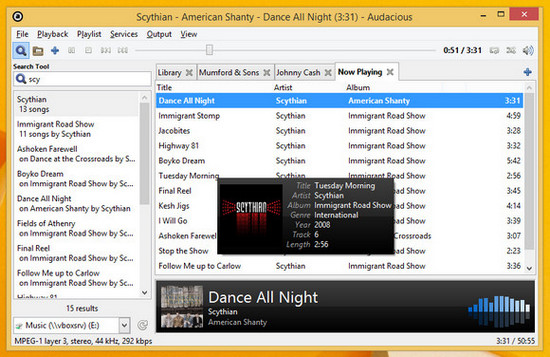 As a free and open-source media player software, Audacious gains the popularity of people for its high audio quality, low resource use and support for a wide range of audio formats. This software was initially released in 2005 and the latest version was released in 2008. It is designed primarily for use on Linux and as the default audio player in Lubuntu and Ubuntu Studio, but it is also available for Windows.

Due to the protection of Apple Music, you will find that there are lots of related tools in the market when you search for it in Google. To let you make a right decision among all those programs to convert Apple Music, here we would like to highly recommend Sidify Apple Music Converter (For Mac | For Windows) to you. This program is a professional Apple audio converter, which can not only remove protection and make it easier to convert Apple Music, iTunes music and audiobook to MP3, AAC, FLAC, WAV, AIFF or ALAC format, but also enable to keep lossless quality as original audio and ID3 tags information. After finishing converting, you can transfer the converted Apple Music tracks to Audacious or any other devices for offline listening.

Just tapping the purple setting button at the upper right of Sidify, you can choose output format as MP3 and adjust some basic settings.

to find the converted files.

Please install Audacious Media Player on your computer. And as for Audacious, there are two interfaces for you to choose, GTK interface and Winamp classic interface. Here we take GTK interface as an example to guide you how to add Apple Music files to Audacious.

Step 2 Go to "File" >> "Add Files" option, then select the target folder you saved the converted Apple Music to add the songs. Or you can directly add the files to Audacious Player by using the shortcut key "Shift+Ctrl+O".

How to Download Music from iTunes to Fitbit Versa

How to Play Apple Music on iPod Shuffle