How to Play Apple Music on Sony LF-S50G Smart Speaker


After Amazon Echo hit the markets of smart speakers, Google Home follows on its hells. Now Sony also has come up with a spin of its own: the LF-S50G wireless smart speaker with Google Assistant built-in. This wireless smart speaker is great at voice commands, sounds good and features a handy LED clock. You just need to simply say "OK Google" or "Hey Google" to get Google Assistant to start listening for commands, and it is excellent at recognizing the voice.

As a smart speaker, the audio quality and music streaming features are the points that you care about most. Compared to its competitions, Sony LF-S50G has a better sound quality. As for the feature of music streaming, Sony LF-S50G only supports playing Spotify, Google Play, Pandora and YouTube Music with Google Assistant. However, Apple Music does not appear on the list when you set up Sony LF-S50G. Do not worry about that, because there are 2 ways you can use to play Apple Music on Sony LF-S50G smart speaker. Now, let’s show you the details in the following part.

You can pair and connect Sony LF-S50G with your Blutetooth devices like iPhone or iPod, and after the Bluetooth connection is established between your device and spekaer, you can listen to Apple Music on Sony LF-S50G smart speaker from your Blutetooth devices directly. The only drawback is that you can not activate the Google Assistant to ask your speaker to play Apple Music with voice commander.

But because of Apple's FairPlay is an encryption technology created by Apple, you are prevented from uploading thousands of songs you downloaded from Apple Music. And now all you need is an Apple Music Converter which is capable of legally striping the Apple Music protection and converting Apple Music songs to unprotected audio formats like MP3, AAC.

Now, we will introduce the details on how to convert Apple Music Songs to MP3 and upload the converted Apple Music to Google Play Music or Spotify, then set up your Sony LF-S50G to play Apple Music songs with Google Assistant.

Download and install Sidify Apple Music Converter, then launch it.

Tap on the "Settings" button at the top right corner of the interface. From the setting window, you can choose the output format as MP3, AAC, FLAC, WAV, AIFF or ALAC, and audio quality from 128 kbps to 320 kbps.

Now you can click "Convert" button to start converting Apple Music songs to the audio format you chosen.

Log into Google Play Music account and head to My Music section, then click "Upload Music" button and choose the converted Apple Music songs to upload. The subscription of Google Play Music premium account is needed in order to play and control the music on Sony LF-S50G. 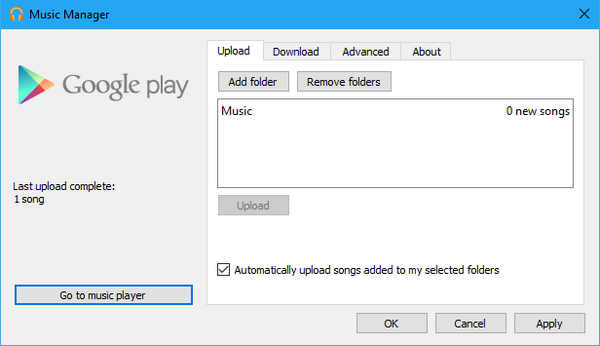 How to Transfer Apple Music Songs to Spotify?

If you want to transfer Apple Music songs from iTunes library to Spotify, you can try the following method to manually copy these playlists over to Spotify...

How to Set Up Sony LF-S50G Smart Speaker?

To use Google assistant, you must install the Google Home app on your smartphone, and you can follow the steps on how to set up your Sony LF-S50G...

Now you can ask Sony LF-S50G to play the Apple Music you uploaded to Google Play account or Spotify with voice commands, like "Play (song name)", "Play (song name ) by (artist)" etc.

Note: The Sidify Apple Music converter trial version is limited to convert the first three minute of each track. To convert the full tracks, you need to purchase a license to unlock the full version.

How to Set Apple Music as Android Ringtone

How to Get Songs from Apple Music to GarageBand

How to Add Apple Music Songs to Final Cut Pro