How to Play Apple Music on Apple Watch without iPhone

Apple Watch is a wonderful workout accessory especially with the release of Apple Music, which allows users to sync albums or playlists you purchased from iTunes or Apple Music on the watch for offline listening. And many people don't like to take iPhone with them when running, cycling or climbing, so Apple Watch also lets you play music directly from your wrist to Bluetooth headphones or speakers without iPhone. Here we share 2 useful ways to help you sync and play Apple Music on Apple Watch without iPhone. 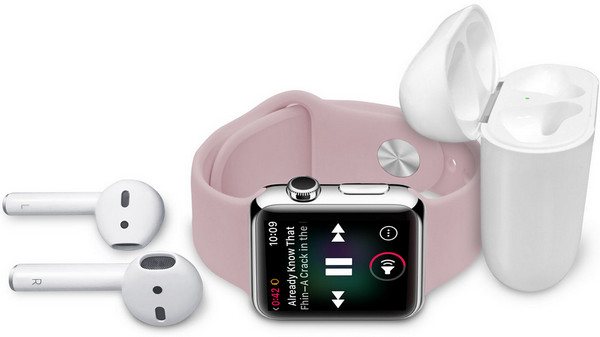 Apple Watch has 2GB of local music storage to let users sync albums or playlists purchased from iTunes or Apple Music, so if you have the purchased iTunes music, or if you are subscribers of Apple Music streaming service, you can easily sync these music or playlist to Apple Watch for offline playback without iPhone. Here just look at the simple steps.

You can open your Apple Music app on iPhone to create a new playlist which you want to sync to Apple Watch. 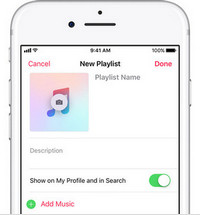 Two things need to be done before sync - Bluetooth needs to be turned on your iPhone, and your Apple Watch needs to be on charge. Then open the Apple Watch app on iPhone, tap My Watch tab and tap Music > Add Music to choose the Apple Music albums and playlists to sync. 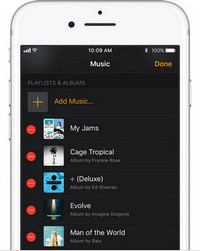 After the Apple Music playlist is synced and your headphones paired, you can open the Music app on Apple Watch and swipe down to show the menu which lets you choose a music source and tap the icon for the Apple Watch. Next, scroll down and tap playlists and you'll see one playlist listed under the header On My Apple Watch, just tap it to let the music play.

The following part is a tutorial on how to convert Apple Music albums or playlists to plain formats as MP3, WAV, AAC, FLAC or AIFF, and sync the converted Apple Music to Apple Watch for listening.

Download and install Sidify Apple Music Converter on computer from the download button above, then launch it and iTunes will be automatically launched.

Then you can click "Add" button to add Apple Music songs to Sidify Apple Music Converter.

Step 4 Sync the Converted Apple Music from Computer to iPhone.

The converted Apple Music will be stored on your computer file folder, so you can add the converted music to iTunes and sync them to iPhone with the same Apple ID or USB cable.

Finally, you can follow the steps on part 1 to sync and play the converted Apple Music playlists on Apple Watch.

Save Apple Music to Mac Computer