Huawei also joins in the season of phablets in this autumn with Apple, Samsung. As Huawei's new flagship, Mate 10 brings users many upgrades including the unicorn 970 processor, the new Leica dual camera etc. If you are looking for a new Android alternative, Huawei Mate 10 can be taken into your consideration because of its high performance and reasonable price. The first thing after you get this new flagship is to transfer contents including contacts, messages, photos, videos or music from old phones or computer and this won’t be a difficult task, but it would be harder when comes to transfer your local Spotify music to Huawei Mate 10. So we will show you the best 2 ways to sync and transfer Spotify music to Huawei Mate 10 effortlessly.

If you're a Spotify Premium subscriber and have already downloaded Spotify music on your old phone or computer, you just need to sync these music to Huawei Mate 10 by logging in the same Spotify account, and it just takes few clicks to complete.

Step 1Download and install Spotify music app on your computer and Huawei Mate 10 if you haven’t, then launch it and log in with the same Spotify account.

Step 2Connect Huawei Mate 10 to computer with the USB cable or WI-Fi.

Step 3Select Huawei Mate 10 from "Devices" from the left-side list on computer and click on Sync "device's name" with Spotify. 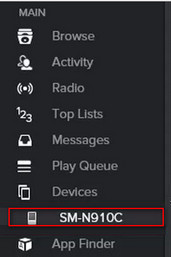 Step 4Click the playlists you want to sync to Mate 10 and it will start syncing automatically.

Step 5Here you can choose Sync all music to this device or Manually choose playlists to sync to select the specific playlists for syncing. Now, let's look at how to download Spotify music as plain audio format to MP3 which is fully supported by Huawei Mate 10 and transfer them to Huawei Mate 10. Here we will show the tutorial on Windows PC.

Then click on the "Settings" icon to customize the parameters including output format, output quality and conversion mode. Here you can choose format as MP3/AAC/ WAV/FLAC/AIFF/ALAC.

After the conversion is completed, you can easily find the downloaded Spotify music files by click on the "Converted" button.

Now you can plug your Huawei Mate 10 to PC with USB cable and start transferring the converted Spotify music.

Note: The trial version of Sidify Music Converter enables you to convert 3-minute audio for sample testing, you can unlock the time limitation by purchasing the full version.